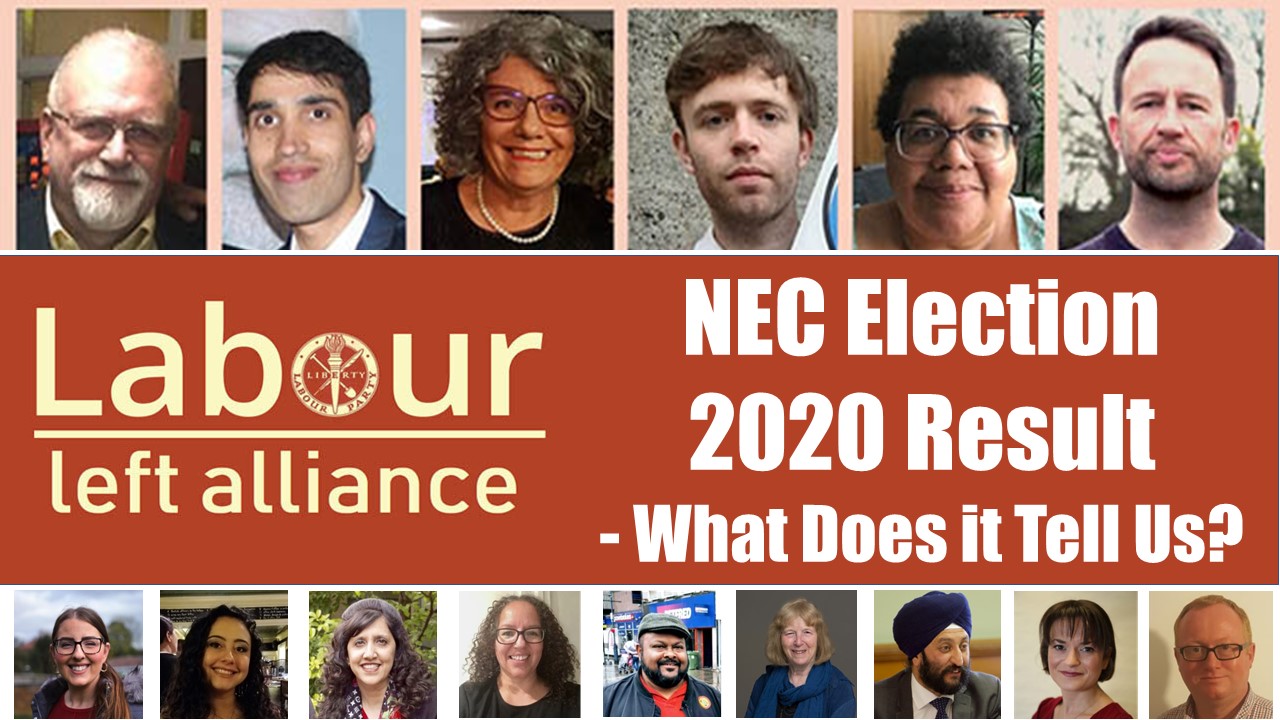 A positive result in the current climate, but the left has a lot of work to do to get organised and to build the fight against the right!

The LLA made a positive impact by organising a slate democratically, with open, political hustings events
2,100 first preference votes cast for Roger Silverman is a fantastic result, especially considering the scaremongering claims by much of the left about “splitting the left vote”, which were shown to be wrong
The change from First-Past-The-Post (FPTP) to Single Transferable Voting (STV) system was clearly an attack by the right on Jeremy Corbyn’s supporters. Despite the mistakes made by the Corbyn leadership, particularly on the issue of the witch-hunt, and the general demoralisation that followed the electoral defeat, there remained the real prospect of another clean sweep for the left in the NEC elections. Despite the lack of unified action and political clarity on the left, and the recent decline in membership of the Labour Party (almost 60,000 have left since Starmer’s election in April), there is still a substantial left membership. STV, however, ensures that a clean sweep is not possible. The fact that many activists believed we should have been aiming for – and could have won – all nine CLP seats highlights the lack of understanding of the voting system. It was always a question of whether the left, or the right, would get five seats instead of just four.

There was no major upset, and it was overall a positive win for the left, which took the majority of five out of nine seats. Having pessimistically (and mostly likely unnecessarily) adopted a strategy to avoid early eliminations by promoting different preference rankings by region, the CLGA (Centre-Left Grassroots Alliance) threw away the opportunity to take the top one or two places in terms of first preference votes, allowing the odious Tory wannabe Luke Akehurst to claim a win by topping that list.

In the end, the final seats that were taken by the CLGA slate were done so comfortably, with the closest contender being Jermain Jackman, with 370 votes short of the runner up Ann Henderson, but almost 1200 short of the last seat taken by Mish Rahman. Some candidates seemed to take a significant bump from the dodgy approach of listing candidates alphabetically on every ballot, meaning surnames beginning A and B at the top of the list were at an advantage – this is a known phenomenon that should be avoided in such an election.

The Labour Left Alliance made a positive impact by advocating a democratic and political approach: we collectively discussed the key political issues that any NEC candidate should fight for in the current climate, then put those questions to all candidates. We then arranged a number of public hustings to allow voters to get to know and actually question the candidates. The LLA pushed a strong political programme, which included key aims such as a sovereign conference, open selection, and a fair complaints process, but importantly it stood out from others as it didn’t shy away from the crucial reality that is the witch-hunt. We collectively formulated a set of demands about the need to democratically review all disciplinary cases from the last 5 years, rejecting the IHRA mis-definition of antisemitism and rejecting the demands of the Tory-supporting Board of Deputies, the adoption of which would be completely undemocratic and would suppress freedom of speech.

We were proud to support six candidates who agreed to campaign on all the issues in our proposed minimum platform. This clearly struck a chord with voters, as despite scare-mongering about ‘splitting the vote’, Roger Silverman received over 2,100 first preference votes and finished 8th runner up after 25 eliminations before him, including 4 from the Labour to Win and Tribune slates. And the LLA candidates together got 5% of first preference votes in an election where candidates could be elected with little over 8%. With support from other organisations on the left of the party we could have won a seat in place of one of the CLGA candidates without giving any advantage to the right. We will continue our efforts to work with others on the left to put forward democratically-selected candidates with clear socialist policies.

The results show that “vote splitting” was not relevant, given that substantial numbers of vote transfers took place; for example the largest number of transfers to the CLGA slate was from the LLA slate (almost 3.7k). The main issue for the left is how to avoid wasted votes, an issue most clearly illustrated by Jermain Jackman’s elimination, when a massive 59% – almost 3,000! – of his votes were wasted. Overall 12% of votes (almost 15k) were wasted, which was well over the quota, and although the quota is adjusted for wasted votes, clearly these are votes that could have been won to make a significant difference. This shows that many voters did not fully understand the STV system, and that the correct voter advice was not spread widely enough. The LLA made significant efforts to spread the correct message, but other left organisations unfortunately did not.

Transfer behaviour indicates many voters had a limited political focus, switching between very different slates or candidates in their preferences. Next time, a unified left slate, established by a democratic process involving a mass of grassroots activists, campaigning on a radical political platform, would provide many more voters with a clearer left wing outlook, which would enthuse them to turn out in greater numbers than they did this time – and with the correct, clear and consistent voting advice, the results could be even stronger for the left. This requires the end of the CLGA process of back-room deals that exclude the grassroots.
We call on activists and left organisations to work with the LLA as a democratic grassroots alliance. Forget appeasement and unity with the right wing, which has resulted in nothing but defeat. Let’s get organised, get ruthless, go on the offensive, step up the fight against the right wing and the witch-hunt, and take back the Labour Party for members, for the working class, for a radical socialist programme!

View all posts by Admin2 → 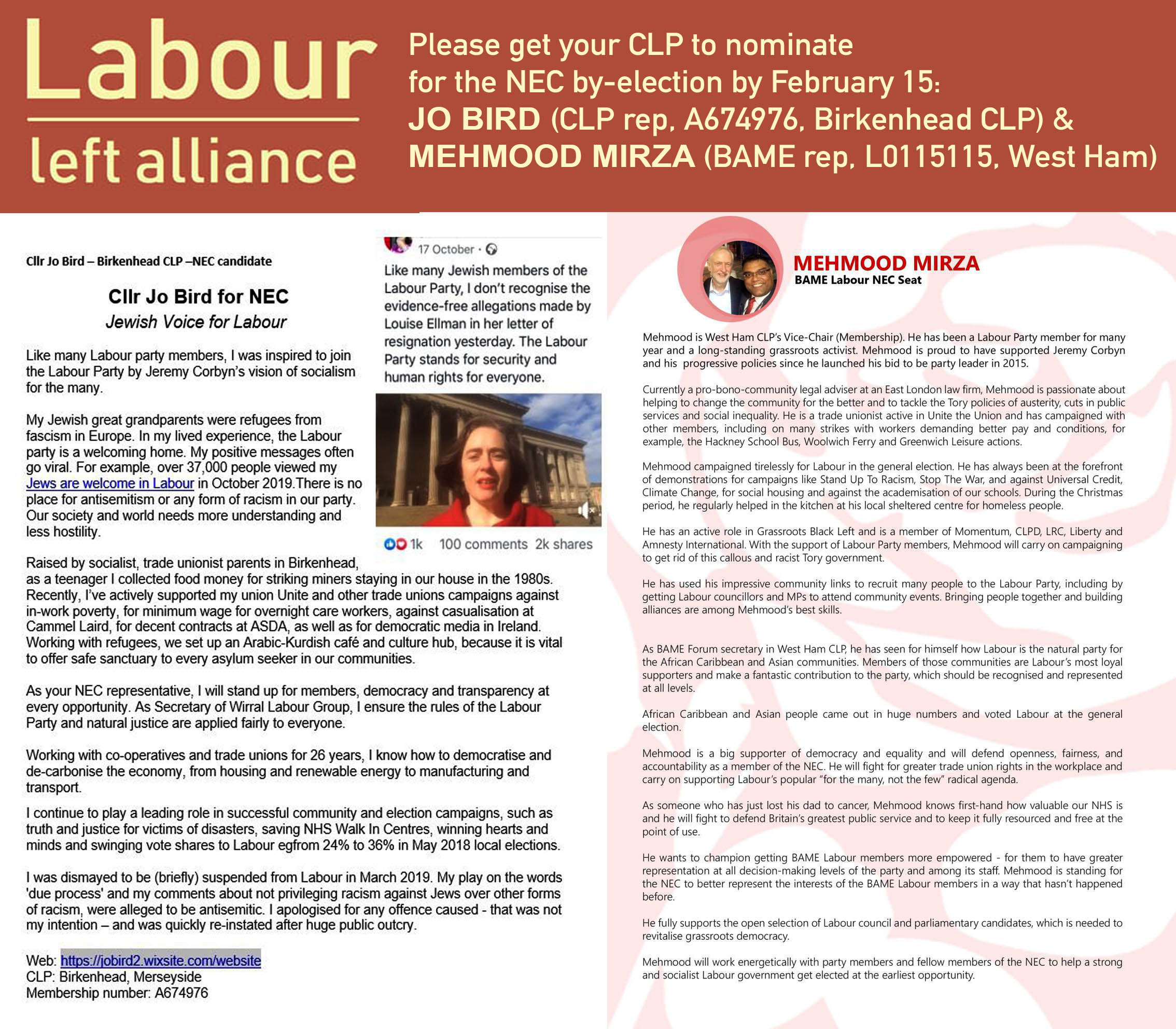