Congratulations to Laura Pidcock, Yasmine Dar, Mish Rahman, Gemma Bolton, and Nadia Jama, the left candidates who have been elected to the NEC, for taking a majority of the nine CLP seats that were up for election.

Considering the dramatic intensification of the witch-hunt against the left in the last few weeks, we hope the five will use their seats to start fighting back openly against the ongoing campaign to attack, smear and demoralise the left.

We would like to thank Roger Silverman, Carol Taylor-Spedding, Chaudhry Qamer Iqbal, Alec Price, Ekua Bayunu and Steve Maggs (the six candidates supported by the LLA), who have made such a positive impact on the level of debate in the NEC elections and have stood openly with all those suspended and expelled as part of the witch-hunt against the left. 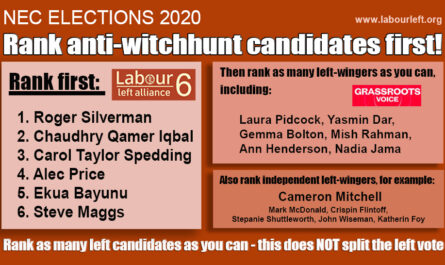