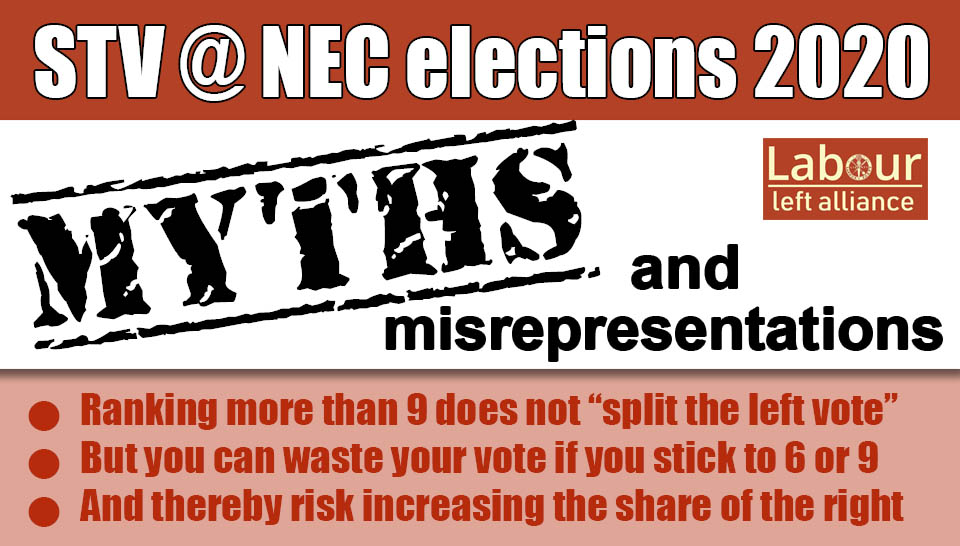 The introduction of the ‘Single Transferable Voting’ (STV) system for the election of the National Executive Committee (NEC) is no doubt an attack by Keir Starmer on the left. It makes it impossible for the left to repeat its success in 2018 and win all nine seats chosen by Labour Party members.

However, STV allows the left to put forward more than nine candidates without any risk of giving advantage to the right – in fact, it is tactically better to vote for more than nine, as this will avoid the risk of inadvertently increasing the vote of the right. On the other hand, there is a real danger of left-wing votes being wasted if left-wing members list only six preferences. More on this below.

Most importantly, STV allows members to rank those candidates who most closely agree with their political principles highest – without any danger of ‘splitting the left vote’. There are a lot of left-wing socialist Labour Party members who are less than impressed with the political platform of the CLGA 6, the way they have been chosen and the political history of some of the six candidates. Our advice actually encourages those comrades to still vote for these 6, even though they might not have done otherwise. Contrary to what some in the orbit of the CLGA say, this is not a display of sectarianism by the LLA, it is exactly the opposite.

The LLA recommends that Labour Party members rank the LLA 6 candidates highest (in whichever order – in fact, it is best to ‘mix it up’ a little). They have shown their commitment to our political platform, which includes the need to openly fight against the witch-hunt in the party and wider society (see all responses here).

B) How basic STV works

C) Some myths and misunderstandings we have come across:

The opposite is the case: If you do not rank enough left-wing candidates, you may waste your vote unnecessarily and increase the weight of the right-wing vote.

In both cases, your vote could have gone to another left-wing preference, but it instead gets wasted and effectively makes the proportion of the vote for the right larger.

In both cases, your vote could have gone to another left-wing preference, but it instead gets wasted and effectively makes the proportion of the vote for the right larger.

There are a huge number of left-wing candidates standing in the NEC elections – six of them are promoted by the LLA, six by the Centre-Left Grassroots Alliance (CLGA), three by Labour Black Socialists, etc. Many other organisations have made voting recommendations. The good thing about STV is that you can rank as many of them as you like, without any danger of ‘splitting the left vote’. In fact, it is important that voters rank as many left wing candidates as possible, to avoid wasting their vote by failing to transfer to another left candidate (ie, if they did not rank another ‘preference’). In other words, you can vote for the candidates listed on all three slates!

We say: Let’s have at the top some candidates who will fight against the witch-hunt of the left. If they don’t get in, at least the vote will transfer to some other left wingers.

This is false – votes do not reduce in value. Two examples:

Take a look at the Hare-Clark method on the ‘Counting Single Transferable Votes’ Wikipedia page for a more detailed explanation of the above.


Some people have been circulating a blogpost from ‘Stats For Lefties’, which claims to show that standing too many candidates cost Fianna Fail seats in Irish general elections. They give two examples but they don’t explain what they think those prove. The first example simply shows that more voters preferred the Labour candidate to the Fianna Fail candidates and so they were elected instead! The second example demonstrates the problem of exhausted ballots – but they try and extend the situation from a three-seat constituency (in an Irish election) to a nine-seat election. It is likely that Labour members will express far more preferences than the average Irish voter. If anything is likely to cause more people to end up with exhausted ballots it is spreading misinformation that they should only rank six!

The most telling thing about the Stats for Lefties blogpost is that the author hasn’t put their name on it, and it doesn’t include any references to articles that support their argument. We have looked and have not been able to find any articles supportive of their argument – though we have found quite a few that rebut it.

A longer and more detailed version of this article is available here.

COHAN, A. S.,R. D. MCKINLAY and. MEGHAN. 1975. The used vote and electoral outcomes: the Irish General election of 1973.British Journal of Political Science 5