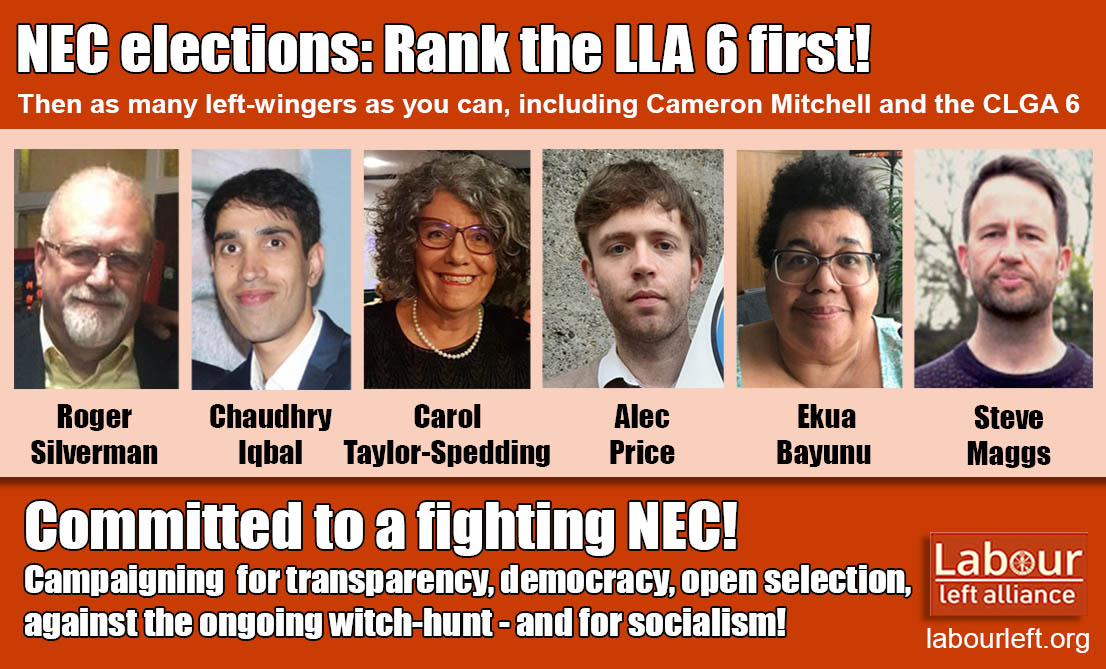 The Labour Left Alliance supports the following comrades in the current NEC elections:

Once voting starts on October 19 2020, we recommend that voters rank the LLA candidates at the top of their list of preferences, but also rank as many left-wing candidates as they can, including Cameron Mitchell  and the CLGA 6 (Laura Pidcock, Yasmine Dar, Mish Rahman, Gemma Bolton, Ann Henderson, Nadia Jama). 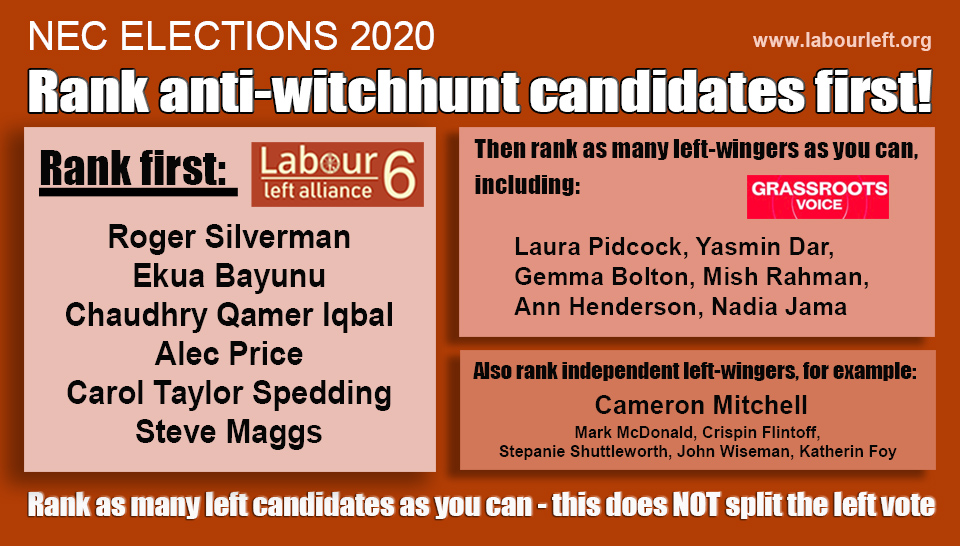 Please find the political statements and leaflets of the LLA 6 below. In addition, they have declared their support for the LLA’s proposed Action Programme for the Left, which includes a commitment to campaign:

This campaign is very much part of the long-term struggle to democratise and politicise the way that that left-wing candidates are chosen – and, more generally, how the established left inside and outside the Labour Party operates.

Here are the videos we have already produced:
A lot of Labour Party members are very confused when it comes to the ‘Single Transferable Voting’ system introduced for the 2020 NEC elections. It is no doubt an attack on the left and designed to stop us from taking all nine seats elected by the membership. But it also gives us the opportunity to vote for principled candidates – without splitting the left vote! This short video features Roger Silverman, Carol Taylor-Spedding, Tina Werkmann and Daniel Platts.

In the video below, the LLA 6 are discussing what kind of issues Labour Party conference should be discussing: how to fight the fallout from the Corona pandemic; the calls by NHS staff for a 15% pay rise; the school closure; racism and defunding the police – and the witch-hunt against hundreds of socialists.

In the video below, the six are discussing not just the democratic deficit of this year’s Labour Party ‘conference’, but the way conference has been hollowed out over the years. They are presenting a number of proposed solutions to make conference the real, sovereign body of the Labour Party.

The political statements of the LLA 6 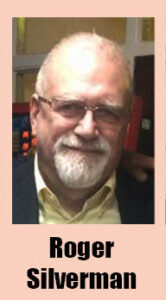 As an NEC member, I would campaign vigorously to restore the supremacy of party conference, uphold the democratic right of open selection of candidates for office, end arbitrary suspensions, and put forward radical socialist policies along the lines of the 2019 election manifesto.
We are currently living through a “perfect storm”. Capitalism today can only offer us deadly pandemics, a devastating slump, racism, repression, and environmental catastrophe. Eight multibillionaires now own as much as the poorest half of the entire world’s population.
It is time to put socialism back on the agenda. Everywhere people are rising to their feet: the youth in their magnificent Extinction Rebellion, entire populations from Chile to Sudan to Hong Kong, in America for Black Lives Matter, in Lebanon against corruption, in Belarus for democratic rights. Labour must stand in solidarity with this worldwide movement.

Labour’s defeat in the December general election was a crushing setback, but we must nail the media lie that our manifesto was a vote-loser. In 2019 Labour actually won more votes than in 2015, 2010 or even 2005 – when Labour won! Only in 2017 did we do even better. We are still the biggest political party in Europe.


Our policies still have overwhelming support: renationalisation of transport and the utilities, a wealth tax, a wholly publicly-owned NHS, a green industrial revolution. This arrogant and bungling government has already caused tens of thousands of needless deaths. Let’s seize the opportunity to harness the energies of our half a million members to build a world for the many not the few. 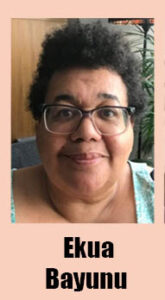 I’m on the ballot because you recognised the need for our leadership bodies to have members with diverse skills, experiences and knowledge, if our Party is to serve all its constituents.I’m a black socialist, proud to have your support and trust. Thank you.
Through this process, you have helped me hone my key priorities. Read Here
My core values remain the same. I will fight for and serve Membership-led Democracy and promote Equality, Transparency and Accessibility. The key principles by which we can deliver a viable socialist Government for this country.

I’ve also had positive principled conversations with comrades about the STV election process. I’ve learned; Don’t believe the hype about the impenetrable bureaucracy. Believe in and take our power as ordinary members and defenders of democracy.

Research the candidates and vote for ALL the principled, experienced and ideologically sound candidates you find. List them all in order of your preference. List 15 if you can find 15 you believe in. I can.
I’d appreciate being your first preference. Remember. You actually only have ONE transferable vote. Make sure it’s not lost.
Supported by Labour Black Socialists and Labour Left Alliance. Check out all the candidates they endorse. 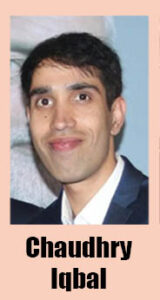 I have been nominated by 36 CLPs for the NEC. I am honoured and thankful to all who supported my nomination. If elected, I will continue to fight for the following (this is not the order as all are equally important for me): 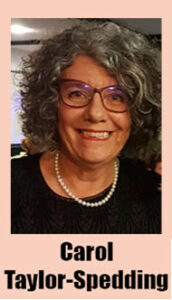 Openness, Transparency, Accountability
If you want a truly fearless Socialist influence on the NEC vote for me and the other LLA candidates: Roger Silverman, Ekua Bayunu, Chaudhry Qamar Iqbal, Alec Price, Steve Maggs

I am committed to:

With STV you cannot split the vote. List as many left-wing candidates as you want. Do not limit yourself to only 9 preferences. 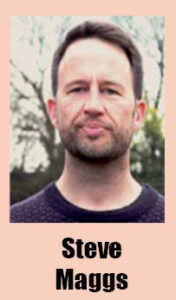 I am a dedicated activist and currently Chair of Harborough CLP.
I will fight for a radical policy platform and not compromise on the key elements that will bring about a more equal, fair and just society. A Labour Party not rooted in socialist policy is not serving its purpose. I will be a strong socialist voice if elected to the NEC.
My key commitments:
Please rank all six candidates supported by the Labour Left Alliance – Roger Silverman, Ekua Bayunu, Alec Price, Chaudhry Qamer Iqbal, Carol Taylor Spedding and me – we are committed to the ‘Action Programme for the left’.  Please also rank as many left wing candidates as you can and include the CLGA 6 in your preferences.
Contact Channels
Email: maggs_steve@hotmail.com
Phone: 07813644034 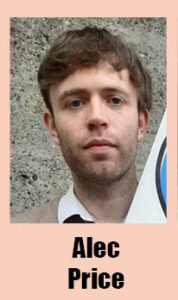 As a child, I watched New Labour attack firefighters, like my dad, striking for fair pay, whilst Iraq burned for oil.

Today, I’m an NHS worker supporting the campaign for a 15% wage rise for my colleagues, on a wider platform “For Socialism: Against Austerity, War & Racism”.

If Labour was set up as the party of workers and created the NHS it needs to vocally support our demands, like the majority of the country do. How else can we win an election?

As we go through the pandemic we need a bold strategy for a post lockdown world based on an economy that meets the needs of the many and not the profits of the few.

The Labour leadership and elected representatives should be spearheading such a campaign, and if they won’t we need an NEC that empowers our members and trade unions to do so instead.

I support the calls for open selection of MPs, a sovereign conference with the power to trigger a deputy/leadership contest and a democratised trade union link.

We have a world to win.

NEC elections: An action programme for the left