The Labour Left Alliance campaigns to democratise the way that the ‘left slate’ for the election of Labour’s National Executive Committee is put together. Until now, this process has been shrouded in mystery, with the candidates being haggled over in backroom deals – which leads to mostly not very left-wing candidates emerging from the ‘negotiations’.

We believe that the political views and campaigning platform of the candidates should be the deciding factor in choosing who is deserving of the support of the left.

The candidates should, as a minimum, commit themselves to the following:

1) Will publish regular reports of NEC meetings, including details of how they and other NEC members have voted.

2) Have been selected by ballot of the grassroots membership

3) Stand on a minimum political platform that includes a public commitment to:

a) Fight for socialism (including democratic ownership and control of a planned economy) and opposing the ruinous system of capitalism.

b) Campaign for open selections for all Labour Party public office holders – including Westminster MPs, which requires the scrapping of the trigger ballot.

c) Thorough democratisation of the Labour Party, including transparent decision-making on all levels of the party.

d) Campaign for conference to become the Labour Party’s sovereign body, especially when it comes to deciding policy. This requires the scrapping the National Policy Forum, which was set up under Tony Blair.

e) Campaign for the Labour Party’s complaints and disciplinary procedures to be overhauled so that disciplinary procedures are carried out in accordance with the principles of natural justice, and be time-limited: charges not resolved within three months should be automatically dropped. An accused member should be given all the evidence submitted against them and be regarded as innocent until proven guilty. All disciplinary cases processed during the last five years have to be overturned, pending unbiased re-examination.

f) Campaign to bring to justice those who have been exposed in the ‘leaked report’ as having worked against the aims of the Labour Party.

g) Campaign for Labour to:

– oppose attempts to label the Boycott, Disinvestment and Sanctions (BDS) campaign as antisemitic;

– overturn the party’s commitment to the so-called definition of antisemitism by the International Holocaust Remembrance Alliance, which conflates anti-Zionism with antisemitism in a number of its examples;

– oppose the party implementing the Board of Deputies’ 10 Pledges, as they undermine party democracy. 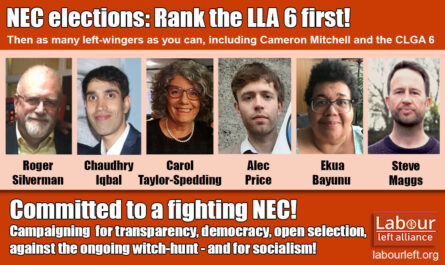