The LLA has been involved in the welcome and long overdue initiative ‘Labour Left for Socialism’, which will organise a first online gathering on September 18,  a week before this year’s Labour Party conference. Unfortunately, what was originally planned as a vibrant, interactive, real-life conference has now turned into an online rally. The declared aim is that the next events organised by the initiative will be ‘proper’ conferences, where different ideas and proposals can be debated and agreed upon in a democratic and transparent manner. The LLA has put its name to a joint position paper outlining the kind of conference of the Labour Left we are campaigning for – here.

The main organisations of the Labour Left are involved in this initiative, including the Campaign for Labour Party Democracy, Welsh Labour Grassroots, Jewish Voice for Labour as well as a number of smaller groups. Some of the most important and active unions have been represented at the various meetings, including Unite, the CWU and the FBU. It seems that Momentum has, perhaps only temporarily, withdrawn. At the first meeting, it was announced that the initiative (set up by ‘Don’t Leave Organise’) would operate under ‘Chatham House Rules’, which prevents participants from reporting who said what – so we hope comrades forgive our slightly opaque reportage.

Progress has been slow – politically and organisationally. In the last six months, there have been four ‘big’ meetings with around 20-30 organisations present, however the real work is done by a smaller ‘working group’, which meets more regularly. The LLA has only just been allowed to join this smaller group and we hope we’ll be able to help to move things forward.

The aim of the initiative is to unite and reform the Labour Left, including the way candidates for internal Labour positions are chosen. Currently, this is done by the Centre-Left Grassroots Alliance, but this has become increasingly dysfunctional, chiefly because of the ‘consensus’ method used to come to any decisions. In reality, a single organisation can hold things back by using a veto – which is how the LLA’s request to get involved has been denied (well, not even answered).

On July 31, the initiative met for the fourth time – just a couple of weeks after four left organisations had been proscribed, including Socialist Appeal, Labour Against the Witchhunt and Labour in Exile Network. For this reason, a number of groups involved in the talks decided to put forward the emergency motion below. In the end, the motion was not taken, however it was unanimously agreed that LAW and LIEN would be invited to participate in the ‘Labour Left for Socialism’ talks. That is a brave and welcome decision.

However, after a couple of agreed amendments were ‘tidied up’ after the meeting, the text to advertise the first rally now declares its solidarity only with those groups who have been proscribed “solely for holding socialist views”. One could argue that this excludes both LAW and LIEN, who have apparently been banned because they allegedly “downplay antisemitism” (we write ‘apparently’, because the text of the motion agreed by a majority of the Labour NEC has still not seen the light of day). The LLA, the Labour Representation Committee and Labour Black Socialists have protested against the addition of this half-sentence, which was not agreed or even discussed at the meeting – and actually turns the original amendment, presented by the Jewish Voice for Labour, on its head.

The LLA will continue to campaign for the whole Labour Left to work together in a democratic, transparent and principled manner in the fight for socialism.

Emergency motion to ‘Future of the Labour Left’, July 31

This meeting condemns the recent NEC decision to proscribe a number of leftwing groups, including Labour Against the Witchhunt, Labour in Exile Network and Socialist Appeal. None of these named groups have campaigned against the Labour Party or supported candidates standing against the party. We also note that the NEC agreed to set up a panel to investigate other organisations with a view to proscribing them later.

We believe that such McCarthyite methods are being adopted in order to attack and shut out socialists from the party, despite the party describing itself as socialist. This purge of the left by Starmer’s leadership is an attempt to reverse the socialist policies brought in under Corbyn, and to make the party a safe pair of hands for capitalism.

Instead of attacking its own members, the party leadership should be using all of its efforts to fight this criminal Tory government on the basis of bold socialist policies. 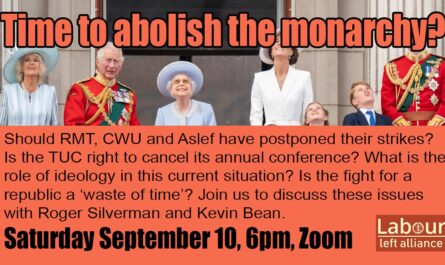 Our questions to all Momentum NCG candidates – and their answers