We take courage from the over 80,000 members who voted for Richard Burgon as deputy leader. His campaign was unashamedly radical and we note with great interest his “plans to build on the values and principles of my Deputy Leadership campaign”, which he “will continue to take forward”. The LLA will get involved in any such campaign.

The LLA supported Jo Bird in the by-election for the two CLP seats on the NEC. She came fourth with 46,150 votes, despite her outrageous suspension (for the second time) in the middle of the election. A massive outcry from members forced her reinstatement. Sadly, other candidates remain suspended on what we believe are bogus charges. Such suspensions during an election, without serious evidence, are unjustified and can be abused for political gain. The fact they are all left-wing candidates makes it likely these were indeed right wing manoeuvres.

Jo Bird received more significantly more votes than Momentum candidate Leigh Drennan (who argued against open selection at Labour conference 2018 – 30,021 votes) and Cecile Wright, who was backed by the Campaign for Labour Party Democracy (25,008). But because the Labour left could not agree on a joint set of candidates, all three left-wingers were beaten by the right’s candidates Johanna Baxter (57,181) and Gurinder Singh-Josan (57,181). Lauren Townsend, who tried hard to stay politically ‘neutral’, came third with 56,929 votes. This disastrous result shows that the Labour left must end its anti-democratic methods of choosing candidates behind closed doors. The LLA has initiated a process that we hope will lead to a more transparent and democratic method. We urge all organisations on the Labour left to join with us in this process. Click here to read more about it.

Rebecca Long-Bailey was a weak candidate and ran an uninspiring campaign, thanks in large part to Jon Lansman’s influence as her campaign manager. A grievous mistake was to sign up to the Board of Deputy’s absurd ’10 Pledges’ and her promise to outsource the party’s disciplinary process to an unknown agency (see LLA’s petition on the issue, which has already been signed by 5,000 people – click here). Her comments about being willing to press the nuclear button also didn’t help. In other words, her attempts to present herself as the anti-establishment candidate quickly fell away when she came under pressure from that very establishment.

The right has won a battle, but it hasn’t won the war

The Covid-19 pandemic has dramatically exposed capitalism’s limitations. As a system that needs to constantly increase its profits, it has proved utterly incapable of stepping up to satisfy the needs of humanity. Tens of thousands will die prematurely and unnecessarily, because health services around the globe have been privatised and starved of vital funds.

The Tory government has been forced into taking some drastic measures that make the demands of Labour’s media-ridiculed manifesto look like peanuts. And still they won’t be enough to stop millions of people sliding into poverty, despair and misery. Some of the emergency measures now in place have been designed to stop the working class from taking collective action when the worst of the outbreak is over. For example, the police can easily cancel events and gatherings; immigration officers can force people into detention; those deemed to “threaten national security” can be held for even longer and it takes only the signature of a single doctor to section somebody under the mental health act – indefinitely.

We have a duty to organise our forces and give radical answers to the problems facing our movement. Please sign our proposed action plan here.  In such periods of crisis, almost anything can happen!

Our attitude to the Labour Party therefore must remain flexible. In the new political situation, the LLA may need to increase its efforts on campaigns outside of the Labour Party’s structures. Developments inside and outside the Labour Party will determine how much emphasis we put into each of these different areas at any particular time.

Because of the undemocratic British electoral system and due to the current low level of the class struggle, experience shows us that any left formations outside the Labour Party are likely to remain miniscule and descend, sooner or later, into irrelevance, losing many good activists along the way. But history suggests that this situation could also change quickly.

Our main task now is to help organise those who were inspired by Corbyn. Urge comrades to keep hold of their Labour Party membership cards and, where still possible and worthwhile, continue to play key roles in branches and CLPs at least. Prevent the gains we have made from being rolled back. And enthuse comrades to fight for some of the overdue demands that Corbyn could not deliver.

First we need to explain honestly what went wrong following Corbyn’s election in 2015. Millions were inspired – how come very little has been achieved?

Lessons we must learn:

*** Open selection of all parliamentary candidates before every election

*** A democratic and sovereign annual conference and the abolition of the National Policy Forum, which Blair used to outsource and neuter policy making in the party

*** A fair and transparent disciplinary process, based on natural justice, due process and judgments made by one’s peers, not an outside agency. Scrap Legal & Governance (formerly compliance unit). For the right of appeal.

*** The democratisation of the trade union movement and the empowerment and increased input of union members in the party structures at all levels. All trade unions should affiliate to the Labour Party.

Join us to discuss the outcome of the elections – Sunday April 5, 5pm

You need to register in advance for this webinar:
https://zoom.us/webinar/register/WN_cdMlHRRUQjq8LA9smk2R5A

Please consider making a donation to help us finance this event (please note the link will take you to Labour Against the Witchhunt’s Paypal account – while our bank account is being set up, they are kindly collating donations for us): https://www.paypal.com/cgi-bin/webscr?cmd=_s-xclick&hosted_button_id=ZZLJXNTM9WG3Y&source=url
Join the LLA here: https://labourleft.org/appeal/ 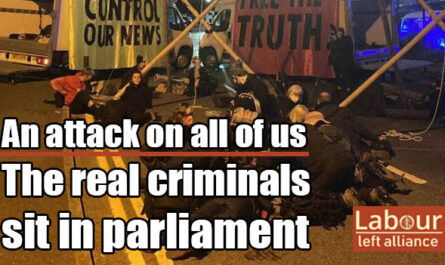