Luciana Berger MP, parachuted into the safe Labour seat for the 2010 general election, was one of the most vocal opponents of Jeremy Corbyn, who used her position as MP to publicly undermine and sabotage him at every opportunity. She helped to spread the lie that the Labour Party is overrun by antisemites and thereby fostered the current atmosphere, in which pro-Palestinian campaigners are regularly tarnished and vilified as antisemites – and she particularly singled out the Labour members in her own constituency. In the end she jumped ship and joined the Liberal Democrats, which really could not come as a “shock” to anybody who had followed her political trajectory. Tom Watson declared that she had been “forced out by racist thugs” in her CLP.

Paula, elected with the help of the left, including the Wavertree 4, seemed to support that narrative in her article. The four comrades felt so concerned that they wrote a private letter to Paula, but we understand she simply brushed their concerns aside. Without any decision-making CLP meetings taking place where the comrades could have presented a motion, the four decided to publish their views in the weekly internal CLP bulletin of May 26, which has been functioning as a medium of debate and has been featuring all sorts of local and national events during the Covid-19 lockdown.

The four comrades wrote that, “Paula’s words will most certainly be taken to imply that we, as a CLP, were responsible [for Berger’s departure]. This accusation has been repeated by our political opponents, such as the anti-Corbyn Labour right and the Liberal Democrats on numerous occasions, culminating in Tom Watson’s calumny, under the protective cloak of parliamentary privilege. In the furore that followed, individual officers and members, such as our then chair, were subjected to further abuse and false allegations in the media, all of which were designed to obscure the political differences between Ms Berger and the CLP.”

Clearly, nothing in their letter is even vaguely antisemitic. The four committed the crime of questioning if the local CLP (and the party as a whole) is really overrun by antisemites – that is enough to get you charged with being an anti-Semite yourself!

Of course, members don’t just have the right to criticize their MP – in a truly democratic party it is their duty to do so! These latest suspensions are clearly a serious attack on the right to free speech in the party.

The witch-hunt in Labour started as a campaign to get rid of Jeremy Corbyn. The leaked report has proven beyond all doubt what the right in the Labour Party is capable of – they would rather destroy the party than allow it to be taken over by the left. But sadly, the Corbyn leadership, with the help of Momentum, sought to appease these forces rather than fight them, which allowed the witch-hunt to grow and become even more vicious. No wonder that under Keir Starmer it has been expanded once more – now in an attempt to eradicate the entire Labour left. We know of dozens of suspensions in the last couple of weeks alone, some of them based on a single tweet.

But we will not be silenced! We will continue to oppose attempts to undermine party democracy, censor debate and to equate anti-Zionism with antisemitism. And we will continue to demand a disciplinary process that is fair, transparent and just – these latest attacks show how overdue that is. This fight back has only just begun- and will continue until the witch-hunt is defeated!

Please email info@labouragainstthewitchhunt.org if you want to add your organisation’s name to this petition 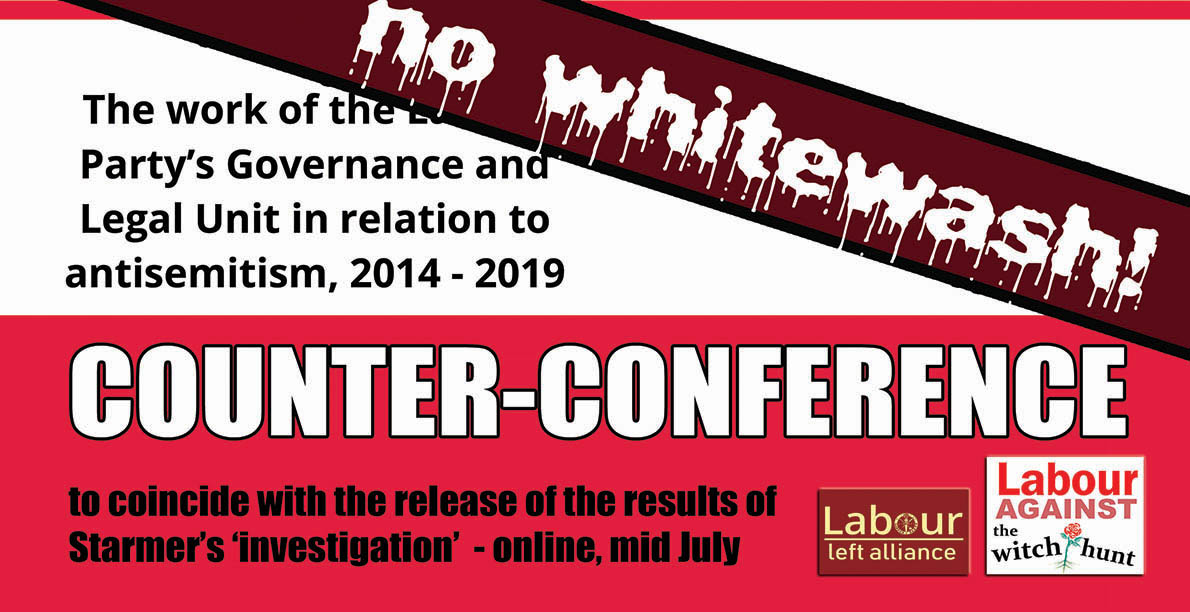 No whitewash! Counter-conference on the ‘leaked report’