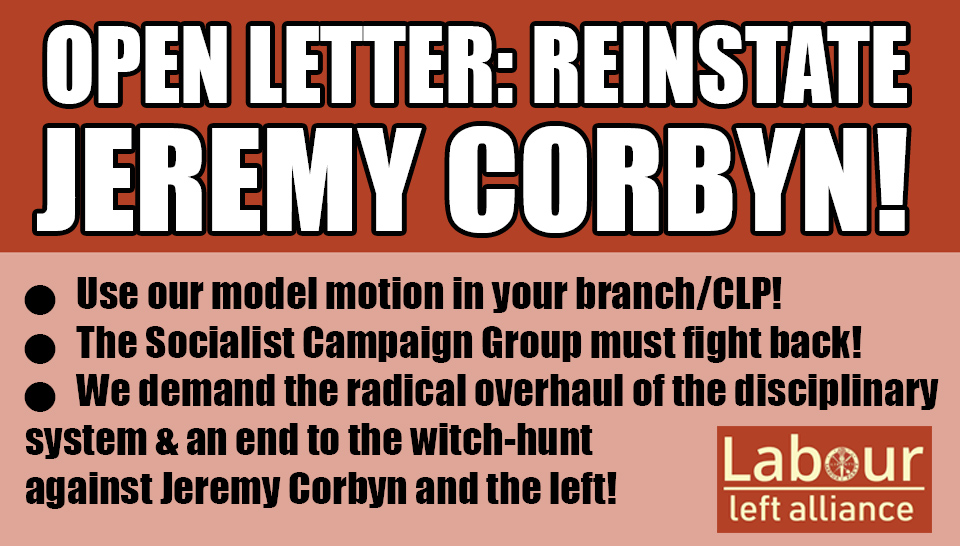 Reinstate Jeremy Corbyn! Stop the witch-hunt against the left!

We are Labour Party members and supporters who are outraged by the suspension of Jeremy Corbyn from the Labour Party.

He was absolutely right in the comments that got him suspended: “One antisemite is one too many, but the scale of the problem was also dramatically overstated for political reasons by our opponents”.

Jeremy Corbyn is the latest victim in a witch-hunt against the left, which started as soon as he was elected leader of the Labour Party. Hundreds of socialists and Corbyn supporters have been suspended and expelled for comments that often do not amount to much more than what Corbyn said. All manifestations of racism, antisemitism and Islamophobia must be combatted – which is, we believe, most effectively achieved by a culture of free speech and open debate.

While the genuine left of the party wholeheartedly want to eradicate all forms of racism in society, such efforts have been overshadowed by a campaign by the right inside and outside the party, which was never about fighting antisemitism; it was a campaign designed to get rid of Corbyn and make sure that the Labour Party becomes once again a safe “second Eleven” that could run Britain on behalf of capitalism and follow the US into any new military adventure.

We demand the immediate reinstatement of Jeremy Corbyn, as well as a public apology by Keir Starmer and Angela Rayner.

We also call on the Socialist Campaign Group of Labour MPs to come out strongly in support of Jeremy Corbyn and take a lead in fighting the witch-hunt against the left.

In these times of crisis we need the Labour Party to offer bold socialist policies, and the right must not be allowed to derail this important task – the witch-hunt must end, so the membership can be free to fight for a society that offers the working class a real alternative to this rotten capitalist system.