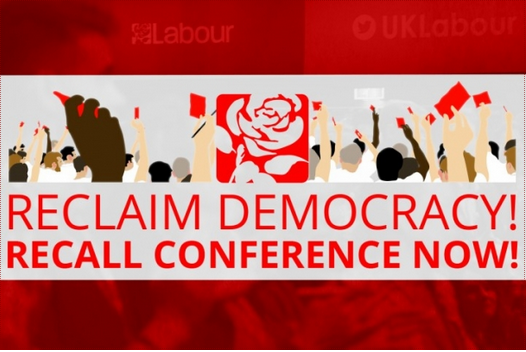 We need a National Labour Recall Conference now!
Either organised by the Labour Party – or the Labour movement!

The Labour Left Alliance wholeheartedly supports the main thrust of the model resolution proposed by the Socialist Campaign Group of Labour MPs, several Labour NEC members, the trade unions UNITE, the Fire Brigades Union, and the Bakers, Food, and Allied Workers’ Union, along with Momentum, Don’t Leave Organise, Labour4Clause4 and others, calling for an immediate recall conference of the Labour Party as “the only body with the necessary authority to resolve the escalating crisis within the Labour Party concerning freedom of debate, freedom of speech, and interference in the workings of our CLPs”. However, we maintain that there can be no ‘unity’ with those that attack the left and suppress democracy.

In the event that Labour’s National Executive Committee rejects this proposal, the LLA calls on the signatories to this model resolution to take urgent steps to convene such a conference themselves, and to invite all CLPs, trade unions and other affiliated organisations and organisations of the Labour Left to participate in the campaign.

We would also urge members to submit to conference through their BLPs and CLPS motions of censure of the leadership for cynically engaging in attempts to suppress democracy and to punish, suspend and expel members simply for exercising their right and duty to engage in the party’s democratic processes through debating motions on important issues.