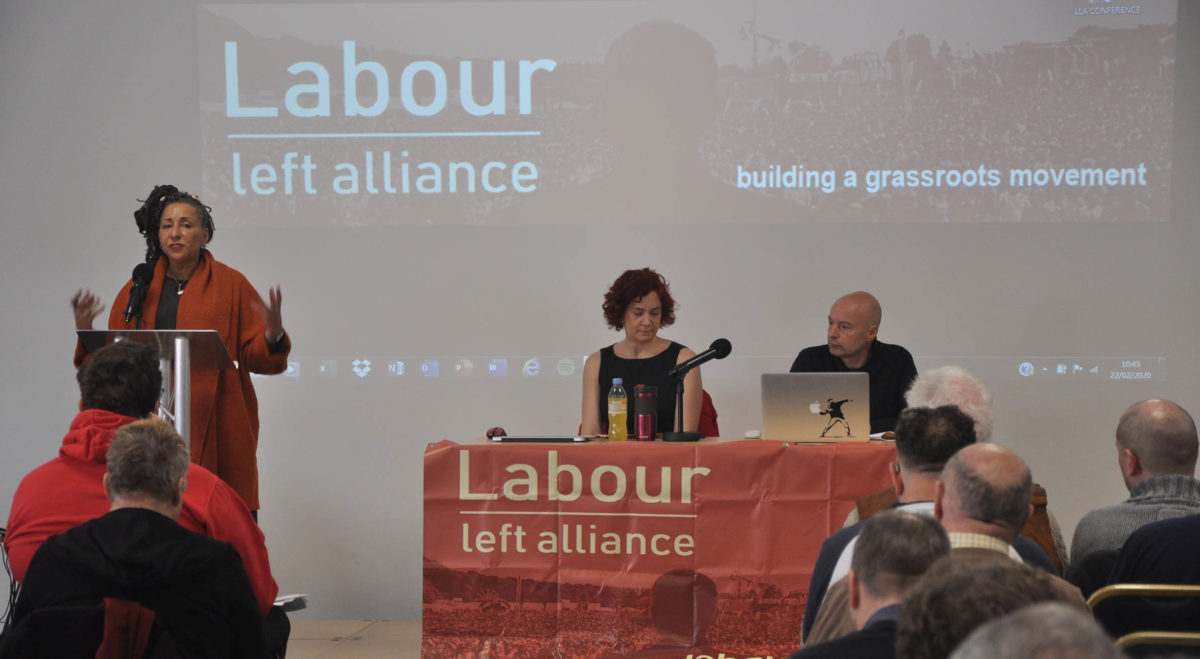 In the run up to conference, we received twelve motions (most of which were agreed) and four detailed proposals for a LLA constitution. Conference decided on what we believe is a very democratic (and unusual) way to decide our structures: The conference arrangements committee had prepared a composite constitution, which featured the ‘common ground’ of all four proposals and then presented their key differences in clearly defined ‘options’ that delegates could vote on. The many hours of work contained in preparing this CAC constitution paid off: many delegates made reference to how “democratic” this process felt and that the proposers of the original four draft constitutions got ample opportunity to present the case for their particular vision and proposals for the LLA. Our new constitution is available online here. Below is a detailed outline of how conference voted on which amendments, options and motions.

John Bridge of London LLA had raised a point of order requesting that the discussion of the constitutional options be taken first and moved to the morning session, as in his view to do otherwise would be “putting the cart before the horse”. While his point was well taken, it was felt that at such short notice the conference agenda could not be so drastically re-ordered, and the original running order, with single-issue motions from individual LLA groups taken before lunch, was retained.

Tony Greenstein of Brighton LLA raised a second point of order requesting the suspension of the proposed Standing Orders, on the grounds that conference had not had the opportunity to debate them. Although recognising that this situation was not ideal, after some discussion it was concluded that conference would operate on the basis of the Standing Orders contained in the Delegate Packs provided.

There are more pictures from our conference available here.

Steve Burgess from Manchester presented an emergency motion on Rebecca Long-Bailey’s February 16 TV interview with Andrew Marr. However, the CAC felt that this was not a real emergency and that aspects of the motion were covered by a motion on the IHRA definition of anti-Semitism, which was discussed earlier in the day. The CAC also thought that our ‘Open Letter to Rebecca Long-Bailey’ deals with much contained in the motion and asks RLB to distance herself from the Board of Deputies’ so-called 10 Pledges. This decision by the chair to disallow the motion was put to conference: 45 voted in favour of hearing the motion and 45 against, so the motion fell.

We raised £1,268.58 at conference, which means we are not just able to cover the cost of the hall (£500) and the printing of the delegates pack (£482.40) – but also some previous printing and website hosting costs!

-> overwhelmingly passed after all five constitutional motions were moved, which means we went straight onto discuss the CAC composite constitution only.
-> A point of order to allow voting in parts passed, but the motion was carried in full.

Option A:
Add “Free movement of people” to the Aims [Sheffield LL/LAW]

The three options were taken against each other.

We want to organise within and also beyond the Labour Party to establish a broad-based socialist movement. [Merseyside LL]

We expect all individual LLA supporters to be members of the Labour Party, and organisations to be politically oriented towards the Labour Party and actively engage with it. Other political parties and their members/supporters are not eligible to become signatories to the LLA. [London, Sheffield LL/LAW, Tees Valley LL]

LLA shall be a broad left organisation composed of the those groups and individuals who subscribe to its principles and who are:

3.2 Difference: How is the leadership elected?

The five options were taken against each other, plus ‘Neither’

Second straight vote between Option A) and Option B)

4.2 Difference: How are delegate numbers determined

Option A:
The OG decides on a number or ratio of delegates, including for those from affiliated organisations. [LAW/SLL, Tees Valley LL, London LLA]

Option B:
All LLA members may attend and vote (one member, one vote)
Group/organisation delegate numbers are determined as follows:

Motions must be passed by both

Where a motion fails to obtain majority support by both a. and b. above, but achieves a majority of one of them, then the motion will be referred to the Organising Group.

All decisions are made by a simple majority of those voting.