As agreed by the LLA launch conference on 22nd February 2020. You can download the constitution in PDF format here. Please note the appendix at the bottom.

The Labour Left Alliance (LLA) was set up in July 2019 to bring together groups and individuals on the Labour Left in order to build a democratic, principled and effective alliance that:

2.1. We encourage all those not already involved in local Labour Left groups to become active in one or help set one up. Our aim is to organise every single signatory in an active LLA group.

2.3. We welcome those who have been unfairly or unjustly suspended or expelled from the Labour Party; the Organising Group will make such judgement in such cases.

2.5 Decisions on all levels are made by consensus where possible and by simple majority where necessary (not counting abstentions). Decisions should be reached as quickly as possible, allowing the discussion to be as thorough as possible.

2.6 LLA branches and affiliated groups are encouraged to communicate and form any collaborative ventures they wish.

2.7 We welcome national, regional and local groups, unions and individuals to become signatories of our appeal.

3.2 The OG meets at least quarterly. Meetings should be scheduled well in advance (at least one month). It publishes agendas, minutes, reports and financial overviews and may set up working groups.

3.3 The OG elects its Officers at least annually or after each conference, if sooner. The Officers are accountable to the OG; they work together as the Steering Committee (SC), and shall include as a minimum the following:

Additional Officers may be included as the organisation grows, to be determined by the OG.

3.4 Where an Officer position cannot be filled, the OG may co-opt a signatory of the LLA to the SC – they will have speaking, but no voting rights.

3.5 The SC produces regular minutes and work reports for the OG. If there is a serious disagreement on the SC, the issue should be brought to the OG to be resolved.

3.6 The SC is in ‘permanent session’. It will consider proposals from signatories where possible, but it must discuss all motions or proposals made by at least 10 LLA signatories or an affiliated group.. Should the movers disagree with the decision by the SC, they can submit their proposals to the Organising Group, which will have to discuss it at the earliest opportunity.

4.1 Conference takes place at least annually. A special conference will be held at the request of a number of individual supporters or affiliated groups or branches (to be decided by the OG).

4.3 The OG decides on the ratio of delegates per signatory in an LLA group, and the number of delegates for a nationally affiliated organisation.

4.4 The OG decides on a method to allow the full participation of individual signatories who cannot attend meetings of any local LLA groups.

4.5 The OG establishes a Conference Arrangements Committee (CAC), which decides speakers, and the agenda, and publishes detailed guidelines and timetables for motions and amendments.

4.6 All decisions are made by a simple majority of those voting.

A special conference can be requested by either 1/3 of current affiliated groups/branches or 10% of individual LLA supporters. After each conference, the OG publishes membership figures. Currently, that percentage translates to 200 members.

b) National groups should have at least fifty members in order to be able to affiliate to the LLA and claim two representatives on the OG.

On 22 August 2020 conference passed the following procedures as an addendum to the constitution: 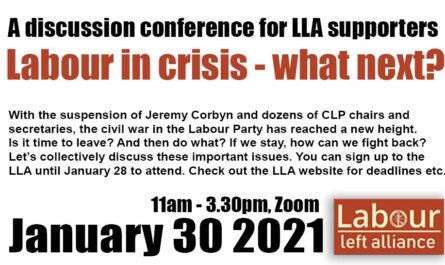 Results: Labour in crisis – what next? A discussion conference for LLA supporters